St Monica’s Church is the oldest Catholic Church in the Western Suburbs of Melbourne. However the actual parish is now one of the smallest – the boundaries being the Maribyrnong River, Ballarat Road, Geelong Road, Victoria street, Walter Street (Yarraville) and Lyons Street.

Like the suburb of Footscray itself, the parish which once comprised a large residential area now consists of a small resident population.

The Parish community reflects the multicultural nature of Footscray, and at Mass on Sunday the Vietnamese community contribute by reading and saying appropriate parts of the Mass in their own language. 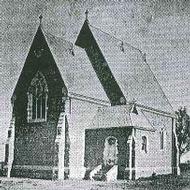 Maps held in the State archives show that in 1852 the land bounded by Whitehall, Wingfield, Moreland and Hopkins Streets was set aside by the Irish Catholic settlers for St Monica’s Church and School.

Although not documented, tradition has it that in the late 1840’s a tent was set up near the Maribyrnong River and used as a school for the Catholic children in the district. 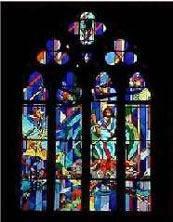 27 December 1852 – The land bounded by Moreland, Hopkins, Whitehall and Wingfield streets was ‘temporarily’ set aside for a Church, clergyman’s residence and school.

28 October 1862 – The land was permanently reserved. The foundation stone of the first stage of St Monica’s church was laid by Dr Goold, Archbishop of Melbourne

In 1964 the Church was extended and the side chapel added.

Since 1977, when it was first renovated extensive work has continued to be carried out. The church has retained its traditional shape and retains many of the stained glass windows and the original organ.

In 1988 to commemorate the bi-centenary a new stained glass window was installed in the West Wall of the church. It was created by the late Bill Gleeson to represent the traditional last judgment.